Have you ever wondered why do cars backfire? Backfiring can be both confusing and scary. Not all of us are mechanics, so it’s pretty scary to hear a loud explosion-like sound coming out of your vehicle and not knowing what caused it and how to make it go away.

”There are mainly 3 reasons why cars backfire: Poorly adjusted ignition timing (when you fire the spark, your intake valve is still open. So, when that happens, if your intake valve is still open and you fire the spark that flame is going to travel back and ignite this entire air fuel mixture and travel right back through the carburetor) , Crossed spark plug wires (if your spark plug wires are mixed in the distributor example: intake spark plug is inserted where the power spark plug should be), or Bent valve (if your valve is bent and cannot close the cylinder completely).”

This was just an overview of what might cause your car to backfire. Of course, there is more to it. Let’s get into it.

The environment inside of the combustion chamber is extremely violent. You have air and fuel rushing into the cylinder through the intake valves and then the valve slam closed as the piston compresses that mixture into an area that’s ten times as small. Then, you have the ignition system which ignites that mixture causing a pressure that forces the piston back down in the bore. If you think that sounds violent, just imagine what happens if the ignition timing fires at the wrong time. That control burn turns into a violent explosion that destroys anything in its way.

Ignition timing refers to the angle measured in crankshaft degrees at which the spark plug ignites the air fuel mixture. As the mixture burns, that expands creating a pressure in the combustion chamber. The goal here is to have the maximum cylinder pressure occur at a specific angle, after top dead center when the piston is starting to make its way back down the bore. The cylinder pressure works with the direction of the piston shoving it down the cylinder. If ignition occurs too soon, the expansion of the mixture collides with the piston in a violent explosion known as detonation. The detonation is caused by ignition timing that is too far advanced and it’s extremely detrimental to the engine. Besides a reduction in power, detonation will cause blown head gaskets and even piston failure.

How To Adjust Ignition Timing Correctly

Detonation can easily be avoided by making sure your ignition timing is set correctly. In order to do that, you must understand two different ignition timing settings: Initial timing and total timing. First, understand that the amount of time it takes for the air field mature to burn is the same regardless of engine RPM. So, in order to have maximum cylinder pressure occur at the same point, ignition timing must change with RPM. At a lower RPM, the angle at which the spark plug fires can be closer to top dead center, than at a higher RPM where the angle needs to be increased. 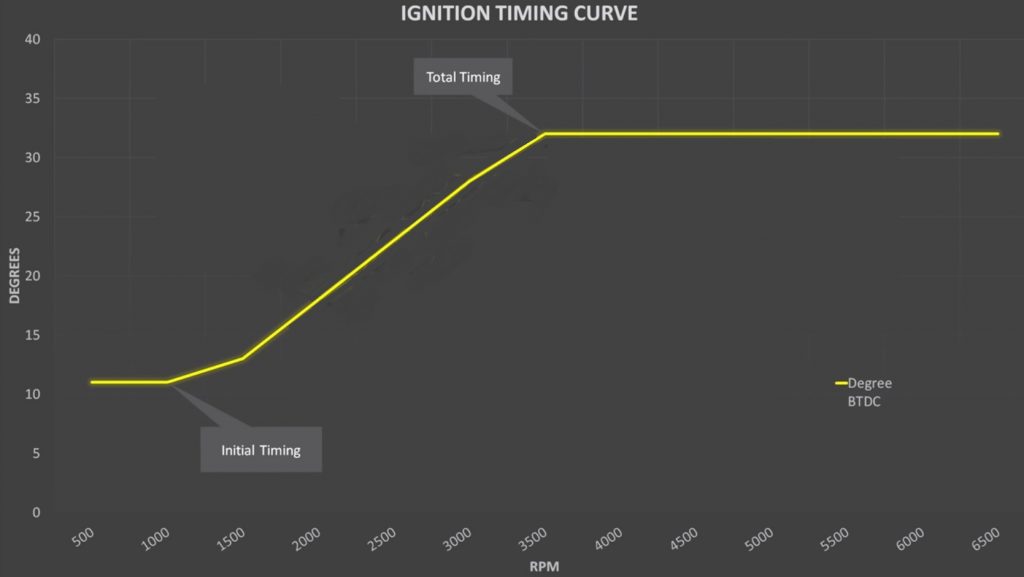 How much it increases is determined by the timing curve. The bottom of the timing curve is represented by initial timing. Initial timing refers to the ignition timing angle when the engine is at idle. Total timing represents the top of the curve and refers to the timing angle at which it stops advancing. This usually is above 2500 RPM, a little vary depending on the application. This is something that you cannot fix at home and is best if you take your car to the mechanic.

This one is an easy fix. Its easier to show you. Take a look at the photo below. Imagine if the spark plugs from the intake are connected to number 1, instead of number 4. Same for the spark plug from the power, instead going into number 1, to be put into number 4. This will cause for the cylinders to open at incorrect times and will cause backfire. If you are not sure which wire goes where, take your car to the mechanic. This is an easy fix. 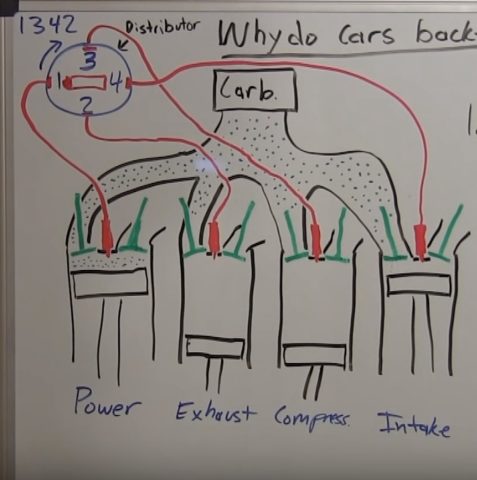 A bent valve can for sure cause backfire. Take a look at the photo below. Imagine if the valve that closes the cylinder is bent, then the cylinder cannot be pressure closed and will leak fuel which will cause backfire. If you are not a mechanic, you cannot fix this. So, take your car to the nearest mechanic and get it fixed.

What Would Cause a Car To Backfire When Accelerating?

An intake backfire explosion can be caused by the fuel-air mixture being too lean when the engine is demanding power. Some cars have a fuel filter which can also cause a fuel pressure and volume restriction plug due to particles in the gasoline they can case a link condition.

Backfire is Bad For Your Car, Afterfire Is Not.

Many people are confused with what is backfire and what is afterfire. The backfire happens inside the intake, the afterfire is the fire that comes out of your exhaust pipes. Backfire is bad for your exhaust system because it is a process where all the unburned fuel gets lit up and creates an explosion. Don’t be afraid of the word ‘explosion’, your car is not going to blow up in air, but this can cause damage to the sensors that the exhaust systems have. Afterfire on the other hand, cannot do harm to your exhaust system. Your exhaust pipe might get dark from the fire, same as your bumper, but it will not do any mechanical damage.

What Causes a Car To Backfire on Deceleration?

Backfiring on deceleration is due to unburned fuel being ignited in the exhaust. It is not only much quieter but also does not allow the fresh air to enter the exhaust due to reversion. This fresh air makes the exhaust think of letting a fire have more oxygen which aids in the combustion of the unburned fuel.

Can A Bad Spark Plug Cause A Backfire?

Carbon tracking on spark plug wires, the next ignition may be enough to fire the spark plug this time with extra fuel in the cylinder, the flame doesn’t burn as explosively and isn’t complete before the opens. The rapid burn that occurs while the exhaust valve is open causes a backfire.

What Causes a Car To Backfire Through The Carburetor?

Backfires can be very damaging to the engine and carburetor. Until the issue is resolved, you should never position any part of your body over the opening of the carburetor. The most common causes for backfires could be:
Each of these areas should be thoroughly checked and then fixed if they’re not in proper working order. If a backfire still occurs, we should now take a look at the carburetor itself. Check the choke to make sure it’s not sticking or binding which would restrict air flow to the engine. Clean the choke components if needed. If the carburetor has an electric choke, make sure it’s getting a full 12 volts from a switch source and that is fully warming up and opening completely. With the engine off briskly, open the throttle and verify a full stream of fuel is emitting from the accelerator pump discharge nozzle.
For further inspections also check that your air cleaner or fuel filter is not clogged. Either condition would result in an overly rich or a lean condition that could cause a backfire. Make sure the bowl vents on the main body are not restricted. Vacuum leaks can cause a backfire and can be located with a leak detection fluid. If you replace the intake at the same time you installed your carburetor, verify that you don’t have an intake manifold vacuum leak. A manifold leak can typically be located at the valley
ends of the intake. Check all the vacuum hoses for cracks or splitting and make sure any unused vacuum ports on the carburetor are plugged up.

This is an easy one. Yes, backfiring sounds like a gunshot. It is very loud and can be mistaken for gunshots.

Is It Illegal For Your Car To Backfire?

This is a little bit in the gray area. There are laws about cars noise pollution. More specifically, you cannot modify your exhaust system to make your car sound louder after it was ‘type approved’. The police can also take action if your silencer is not working in a way that it was designed by the manufacturer.

Is your engine oil due for a change? Visit our Car Fluid Guide Website to learn the importance of changing your oil on time, which type of engine oil is best for your vehicle, and much more.

link to 6 Reasons Why Your Airbag Warning Light Is On

Airbags are an important safety feature in any car. They can help protect you in the event of a collision. That's why it's important to know what to do if your airbag warning light comes on. In this...

We are a group of mechanics and mechanical engineers with 40+ years of experience between us. Our passion is to provide the best and most accurate repair vehicle information that everyone can understand and follow.

Over 20 years of experience working in automotive repair and maintenance. Expert knowledge of manual and automatic transmissions, brake system repairs, engine diagnostics, and all related equipment.

My name is Igor Iwanowski. I am the owner and content creator of www.carcarehacks.com. I am a certified Automotive Service Excellence (ASE) mechanic and a car detailer for 10 years.

I am a car detailer and a car enthusiast with 7 years of experience. I focus on fixing interior and exterior cosmetic problems.