If you have a car that uses variable valve timing (VVT), then you may have noticed oil leaking from the VVT solenoid connector. This can be a big problem, as it can cause engine damage if not fixed. In this blog post, we will discuss the causes, symptoms, and solutions when it comes to oil in VVT solenoid connectors.

What Is a VVT Solenoid Connector and What Does It Do?

A VVT(variable valve timing) solenoid connector is a small electrical connector that helps to control the flow of oil in a vehicle’s engine. It is typically located near the front of the engine, and it consists of two parts: a housing that attaches to the engine block, and a plunger that fits inside the housing.

The plunger is connected to a rod that runs through the center of the housing, and this rod is connected to the vehicle’s oil pump. When the engine is running, the oil pump sends oil to the VVT solenoid, and this oil pressure forces the plunger to move up and down.

This movement allows the oil to flow through a small passage in the housing. This oil then flows into the engine’s valves. The VVT solenoid helps to control the timing of the engine’s valves, and it can improve fuel efficiency and performance.

Most VVT solenoids come with a 3-pin or 4- pin connector already attached. If you need to replace the connector, make sure to choose one that is compatible with your solenoid. You should also check the ratings on the new connector to make sure it can handle the current required by your application.

Why Is There Oil In The VVT Solenoid Connector?

The variable valve timing solenoid is a small electrical-operated device that is responsible for controlling the flow of the oil to the VVT solenoid. The vehicle’s computer sends out information to the connector about when and for how long to open or close the VVT solenoid to allow or restrict the oil flow.

The variable valve timing solenoid is secured in place by one bolt and has seals and gaskets to prevent oil from leaking out of the system. However, having hot engine oil flowing constantly takes a toll on the gaskets and seals. Over time, these gaskets, and seals wear out and small cracks start to appear. Through these small cracks, the engine oil is able to escape and get into the VVT solenoid connector.

In simple words, when the gaskets and seals on the variable valve timing solenoid get damaged, the oil is able to leak out and get into the VVT solenoid connector. This is very bad because the connector has electrical power and any liquid can blow a fuse or worse.

Oil in the VVT solenoid connector can cause a number of engine performance issues. The most common symptom is a check engine light. The check engine light is triggered by P0010, P0011, P0012, P0013, and P0014 trouble codes. The error codes can be read by an OBD2 scanner.

Oil in the VVT solenoid connector can manifest in a number of ways. But, one of the most common symptoms is poor acceleration. This is because the VVT solenoid controls the flow of oil to the engine’s valves, and when it is not functioning properly, the valves do not open and close as they should. As a result, the engine cannot breathe properly and loses power. Poor acceleration may also be accompanied by other symptoms such as engine misfires, reduced fuel economy, and increased emissions.

As your car’s engine wears, internal components begin to experience more friction. The valves that regulate the flow of oil to the engine are one area that commonly experiences increased wear. To help offset this wear, many engines are equipped with a Variable Valve Timing (VVT) system. This system uses oil pressure to adjust the timing of the valves, helping to optimize engine performance.

If the VVT solenoid becomes clogged or damaged, it can allow oil to escape and get into the connector and cause a number of problems, including reduced fuel economy. In addition, the engine may run rougher and produce more emissions. If you suspect that your car’s VVT system is not functioning properly, have it checked by a qualified mechanic as soon as possible.

If your engine is starting to sound rough, or you’ve noticed a decrease in performance, it might be time to check your VVT solenoid connector. The VVT solenoid is responsible for regulating the flow of oil to the engine’s valves. When it starts to fail due to an oil leak, you’ll see a drop in performance.

You might also notice a strange noise coming from the engine, or the check engine light might come on. If you’re experiencing any of these symptoms, it’s important to have the problem diagnosed and repaired as soon as possible. Otherwise, you could end up doing serious damage to your engine.

When your vehicle starts to lose power, it can be frustrating and dangerous. There are many potential causes of this problem, but one that is often overlooked is a faulty VVT solenoid connector. The purpose of the VVT solenoid is to regulate the flow of oil to the engine’s valves when the connector tells it to. If the solenoid connector is not working properly because of an oil leak, the engine will not get the right amount of oil and will start to lose power.

There are several symptoms that can indicate a problem with the VVT solenoid, including a decrease in fuel economy, diminished engine performance, and increased engine noise. If you notice any of these symptoms, it is important to have your vehicle checked by a qualified mechanic as soon as possible. Ignoring the problem can lead to serious engine damage.

The VVT or Variable Valve Timing is an engine strategy employed by manufacturers to improve performance, fuel economy, and emissions. The strategy uses a phaser and hydraulic control solenoid operated by the engine computer to advance or retard the timing of the intake and exhaust valves. This helps the engine breathe better thereby making more power while also helping it run more efficiently.

The main function of a VVT solenoid is to regulate the oil flow that actuates the phaser. If there is an issue with a VVT solenoid connector, it can oftentimes cause the engine to misfire.

The most common symptom of a failing or bad VVT solenoid is an illuminated check engine light. Other symptoms may include reduced fuel economy, strange noises coming from the engine, or even stalling.

Why Is My VVT Solenoid Leaking Oil?

The oil in your car is circulated through a series of channels and passages in the engine, lubricating various parts and providing cooling. One of the key components in this system is the oil pump, which is responsible for drawing oil from the oil pan and sending it to the various engine bearings.

The oil then flows through the cylinder heads and into the valves (including the variable valve timing solenoid), where it lubricates the moving parts. From there, it drains back into the oil pan and the cycle begins again.

A VVT solenoid is responsible for regulating the flow of oil in an engine, and it is typically located near the timing belt. If you notice oil leaking from your VVT solenoid, it is likely due to a faulty seal or gasket. In some cases, the entire solenoid may need to be replaced. However, if the leak is minor, it may be possible to simply replace the seal or gasket.

If the seal on the variable valve timing (VVT) solenoid is worn out or damaged, the oil will escape and leak out. You can replace the damaged VVT solenoid seal by removing the solenoid and installing a new seal.

Can a Car Run Without VVT Solenoid?

Yes, a car can run without a VVT solenoid, but it would not be running as efficiently as it could be. A car’s VVT solenoid is responsible for controlling the flow of oil to the engine. This system is what allows the engine to vary the timing of the intake and exhaust valves, which increases fuel efficiency and power.

How To Test a VVT Solenoid Connector

1. Scan the vehicle for trouble codes

Before doing any work on your VVT solenoid connector, first, you need to scan your vehicle for trouble codes. To do so, hook up an OBD2 scanned to the vehicle’s main computer port. The computer port is located underneath the steering wheel. Once connected, press run and see which trouble codes your vehicle has.

If there is any issue with the VVT solenoid connector, codes such as P0010, P0011, P0012, P0013, and P0014 can be triggered. This indicates that some part of the VVT system is malfunctioning and you should start by testing the connector.

The connector that is responsible for engaging and disengaging the VVT solenoid is a snap-on type of connector. To remove it, you need to press the plastic (not the wires) and slowly pull. If you have never disconnected this connector before, you might have a bit of a hard time. But just do it slowly so you don’t pull out any wiring.

4. Test the connector with a multimeter

Place the key into the ignition and turn it to the ON position. Do not start your vehicle. You just need electricity to run through the vehicle’s system. Turn on the multimeter and place it on DC volts. Then, place the two test leads into the two electrical connectors (one in each hole). If the VVT solenoid connector is bad, you will not get a reading. No reading means that there is no electricity flowing through the connector and into the VVT solenoid. 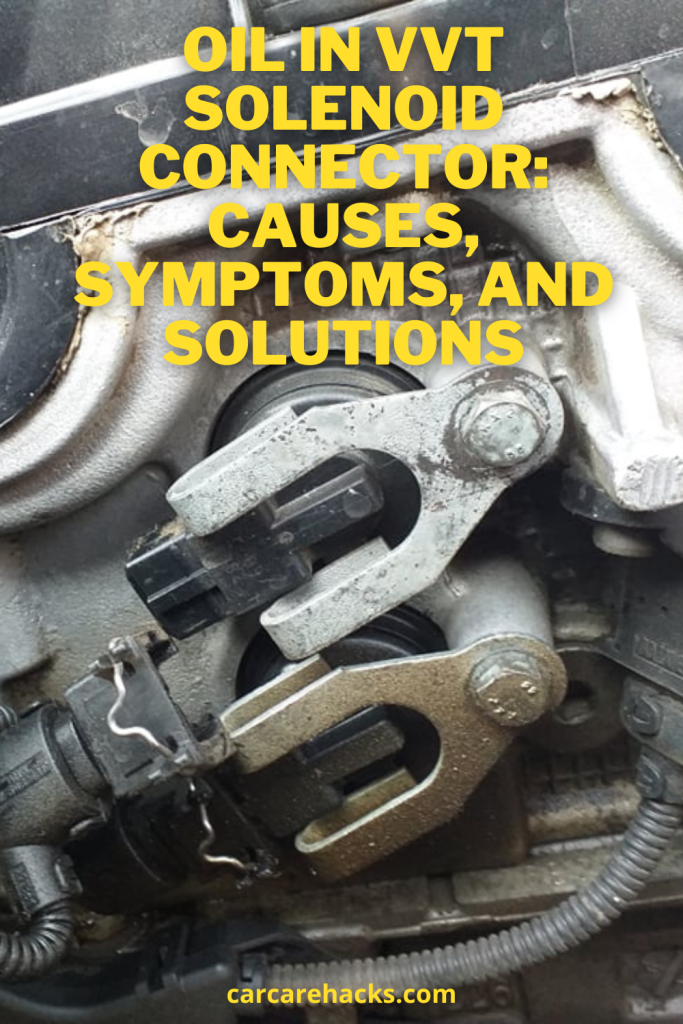