If your EGR valve is stuck, it can cause all sorts of problems with your car. In this article, we will walk you through the process of how to fix a stuck EGR valve. This guide will show you how to identify the problem, remove the EGR valve, and clean it. We will also discuss some potential causes of a stuck EGR valve and how to prevent them.

Fixing a stuck EGR valve includes scanning the vehicle to determine that the EGR valve is indeed stuck, then locating and removing the EGR valve, cleaning the valve with a carburetor cleaner, and then reinstalling it back.

How To Fix a Stuck EGR Valve: A Step-by-Step Guide

If your car is feeling a little under the weather, there’s a good chance that the EGR valve is to blame. This part of your vehicle helps to reduce emissions, and if it becomes stuck, your car will not run as efficiently as it should. Here is how to fix a stuck EGR valve:

Scanning your vehicle with an OBD2 scanner is super important before doing any work on it. For example, a check engine light can be triggered for a lot of reasons. So, how do we know what exactly is causing the problem? The OBD2 scanner. When you plug in your OBD2 scanner and scan your vehicle, it is going to tell you exactly what is wrong with your vehicle.

Trouble codes associated with a stuck EGR are:

The OBD port is located below the steering wheel in most cars. It is usually covered with a plastic cover. Remove the cover and insert the scanner jack. Turn on your OBD2 scanner and scan your vehicle for error codes. Should you see any of the above trouble codes associated with a stuck EGR, proceed to the next steps.

The way some EGR valves sit in a vehicle can be a bit hard to reach. Most of the time there will be some hose in the way. If you are not an experienced mechanic, you will probably not touch the hoses. But, you will have to remove them to gain better access. What I used to do in my early days is tape everything that I removed. If I had to remove a hose I would tape off the hose with yellow tape and then also the place that the hose goes in. This way, there is no chance of messing things up when you want to reinstall them.

Usually, the EGR valve is held in place by two 10-millimeter bolts. But, in some cases, you may find four bolts. Whatever the case, you will have to remove the bolts and the vacuum line that sits on top of the EGR valve. If the bolts are a bit rusty and are not coming off, you could use a bit of WD40 or some penetrating fluids right on the threads, but not too much.

There are a few things you should keep in mind when using carburetor cleaner. First, make sure you read the directions carefully and follow them exactly. Second, be sure to work in a well-ventilated area – carburetor cleaners can be very fumes. And finally, don’t use carburetor cleaner on an aluminum surface – it will damage the finish.

The carbon build-up will happen in the valve itself. It won’t close all the way and that will be equivalent to a giant vacuum leak. The other place where the EGR valve usually gets clogged by carbon deposits is the inlet for the exhaust fumes. You need to focus on these two areas when you are cleaning the EGR valve. So, grab the carburetor cleaner and start spraying into the valve openings. Fill it with the cleaner and let it sit for 10 minutes.

You don’t want to spray in the diaphragm or the vacuum port on top of the valve, so it is best if you mask those parts off with a plastic bag.

There is nothing really much you can do at this point. Just spray the carburetor cleaner and let it do its work. You can repeat this process a couple of times. In between spraying, you can press down the diaphragm and see if the EGR valve is operating as it should (opening and closing).

To reinstall the EGR valve, slide it back in place and tighten the bolts that you have removed. If you removed any other hose, reattach those as well. Finally, attach the vacuum hose to the EGR valve and you are good to go. At this point, you should have managed to fix the stuck EGR valve.

What Happens If My EGR Is Stuck Open?

If your EGR is stuck open, it can cause a number of problems. The most common problem is that it can cause your engine to run lean. This can lead to increased fuel consumption and emissions, and can also cause engine damage. In some cases, it can also cause stalling and misfires. If you think your EGR is stuck open, it’s important to have it checked out by a mechanic as soon as possible.

Another problem that can occur if your EGR is stuck open is that the exhaust gas temperature sensor may not work properly. This sensor is responsible for measuring the temperature of the exhaust gases passing through the EGR system. If it isn’t working properly, it could lead to inaccurate readings and potentially damage the sensor.

If you think your EGR is stuck open, it’s important to have it checked out by a mechanic as soon as possible. Ignoring the problem could lead to increased fuel consumption, emissions, engine damage, and potentially dangerous driving conditions.

Can You Drive With a Stuck EGR Valve?

The purpose of the EGR valve is to recirculate exhaust gases back into the engine. This helps to reduce emissions and improve fuel economy. The EGR valve can become clogged with soot and carbon deposits over time, which can cause it to stick open or closed. This can lead to engine performance problems and increased emissions. Cleaning or replacing the EGR valve is often necessary to restore proper operation.

The EGR valve allows fresh air to enter the engine when it is in the open position. This fresh air helps to cool the engine and prevents knocking. It also reduces emissions by allowing the engine to run leaner. The EGR valve is closed when the engine is idling or under heavy load, such as when you are accelerating.

If your EGR valve becomes stuck in the open position, it can cause a number of problems. Your engine may run hotter than normal and could overheat. You may also experience reduced power and performance, as well as increased fuel consumption. If you think your EGR valve might be stuck, have it checked out by a mechanic as soon as possible. 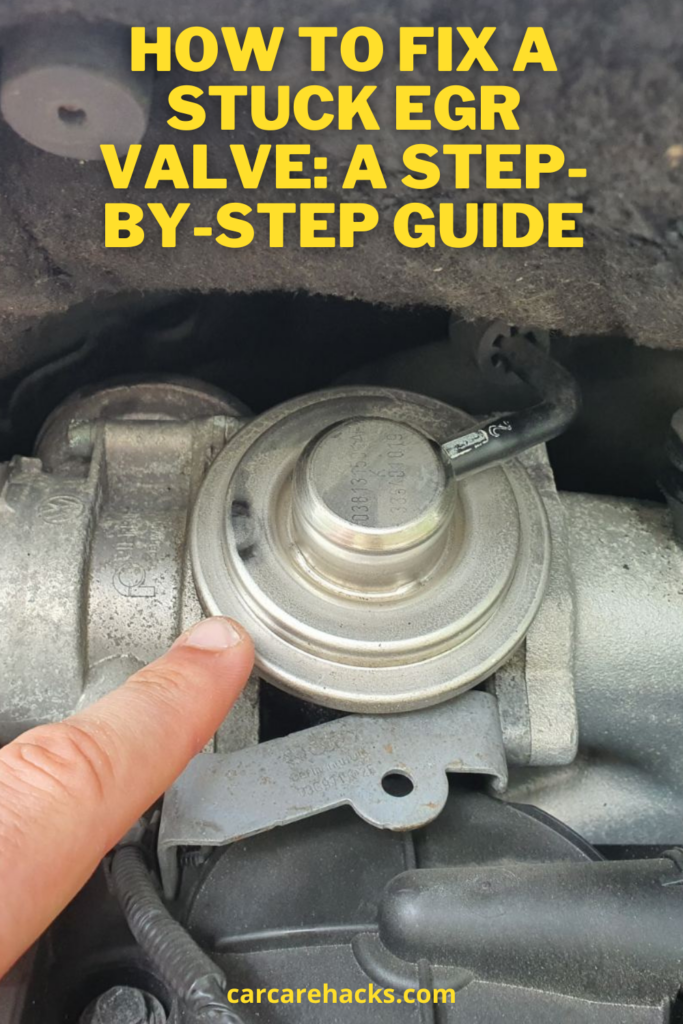