You may have started to notice that your car fan won’t turn off. This can happen while you are driving or after you shut off the vehicle. The radiator fan has the purpose of cooling down the engine. But, why won’t the car fan turn off?

The most common reasons why your car fan won’t turn off are a bad coolant temperature sensor which is unable to measure the temperature of the coolant, a low coolant level which leads to a hotter engine, a bad thermostat that is stuck, preventing the coolant from flowing which results in a hot engine, a faulty radiator fan, or faulty radiator fan relay which keeps the electrical supply to the radiator constantly running.

5 Reasons Why Your Car Fan Won’t Turn Off

If your car fan won’t turn off, it could be due to these five most common reasons:

A coolant temperature sensor is an important component for regulating the engine’s temperature in modern cars. The sensor sits in the internal cooling system of the car, providing essential information about temperature and pressure readings.

The coolant temperature sensor contains an interior heating element and a platinum or nickel-based sensing probe, which sits within a fluid-filled pocket inside the cylinder head. When temperatures rise, heat from the engine is absorbed by the fluid in this pocket, causing it to expand and press against the sensing element. This triggers a voltage signal to be sent out which allows it to monitor the coolant’s temperature accurately and triggers the radiator fan.

The coolant temperature sensor is responsible for controlling the car fan. It sends a signal to the fan’s electrical circuit when the engine gets too hot. If the sensor isn’t functioning properly, it won’t detect when the engine needs to be cooled and can cause the fan to run continuously.

Faulty coolant temperature sensors are one of the most common reasons a car fan won’t turn off. This malfunction often occurs through long-term wear and tear on the sensor, which is responsible for monitoring the coolant temps in your engine block.

Fortunately, replacing a faulty coolant temperature sensor is relatively straightforward when you get it checked out by a mechanic. In this case, they’ll be able to flush out any old coolant still lingering in the system. Then, swap out your current sensor for a new model and restore your car’s cooling systems back to normal.

Coolant is an important element in a car’s engine, helping to keep it running smoothly and efficiently. Coolant helps to disperse heat more effectively and prevent overheating, which can be damaging to the engine. The coolant level in your car should be monitored on a regular basis to ensure it is constantly topped up.

The process of adding coolant is fairly straightforward but also important for getting it right. First, locate the radiator cap and unscrew it, then pour in the necessary amount of coolant. If you are unsure how much to use, refer to the manual or look up your vehicle’s specifications online. You may want to mix water with the coolant according to package instructions before adding it in order to dilute its strength.

Once you’ve added the recommended amount of coolant, install the radiator cap. Start your car and let it run until it is warmed. This will ensure that the coolant circulates throughout the cooling system and cool down the engine.

The thermostat in your car is an essential component in maintaining the temperature inside your car. By controlling the amount of liquid that flows through your radiator and engine, it prevents your car from overheating and helps you to maintain a comfortable driving experience year-round.

The thermostat contains a valve that opens when the vehicle’s internal temperature reaches a certain level, allowing hot coolant to flow through your radiator, and informs the vehicle’s computer to turn on the radiator fan. This helps to reduce or regulate the temperature of the engine so it can run at its optimal performance level.

When the engine temperature reaches a certain point, the thermostat sends a signal to the vehicle’s computer about when to allow the coolant to flow through the system and when to engage the cooling fan. Cars have electric cooling fans which kick into gear if temperatures exceed safe levels. This extra airflow helps to keep your engine from getting too hot on particularly hot days or after heavy use.

However, if the thermostat is bad, it can send a faulty reading to the vehicle’s computer. The ECU will keep the radiator fan constantly running, even when it’s not supposed to.

Being aware of how your car’s thermostat functions are essential for ensuring that it runs smoothly and efficiently.

When your car’s radiator fan won’t turn off, it can be a frustrating issue that causes extra wear and tear on your vehicle. While the problem could be due to a number of issues, the culprit might very well be a faulty radiator fan relay. A relay is an electronic switch used to switch a large electrical current on or off. These are often used in vehicles to control low-voltage accessories such as fuel pumps and fog lamps. In the case of your radiator fan, it’s likely that either the relay itself is defective or its electrical connection has become corroded or severed.

Checking for a faulty relay in your car may seem like a daunting task. But, with the right tools and knowledge, it can be done relatively easily. First, locate the fuse and relay box. In most cars, it is located in the engine bay, next to the battery. Once you’ve found it, visually inspect it and check that all connections are properly in place. The fuse cover will have a chart for each fuse and relay explaining which car component they supply power to.

Next, using a multimeter or other specialized circuit testers, test each connection to ensure the correct current is being received. If any measurements don’t match what’s expected – particularly if there’s no electricity at any point – then it’s likely that the relay has failed. Finally, once you’ve confirmed that it is indeed faulty, remove the old relay and replace it with a new one to restore electrical connections throughout your vehicle.

A faulty radiator fan can be an issue in any vehicle, regardless of make and model. If your radiator fan won’t switch off, then there could be a few potential culprits. Firstly, it could be as simple as a broken fuse. If the electrical connections that power your fan are disrupted, then the switch may not be able to make contact with the batteries and send the correct signals.

It may also indicate that the radiator fan is damaged or malfunctioning. For example, if it hasn’t been properly maintained then the fan may have deteriorated over time and stopped working correctly. Another possible cause could be a fault in the cooling system itself. If the pipelines aren’t clean, then air bubbles can build up – preventing coolant from circulating effectively. This can cause pressure to build up within the system which can prevent parts from turning on or shutting down.

In these cases, checking all mechanical components – such as hoses, sensors, and valves – is essential to identify any issues that may be preventing your fan from turning off. Ultimately, diagnosing why your radiator fan won’t turn off requires knowledge of both mechanical and electrical systems. So, it’s always best to consult a professional to get your car running smoothly again. 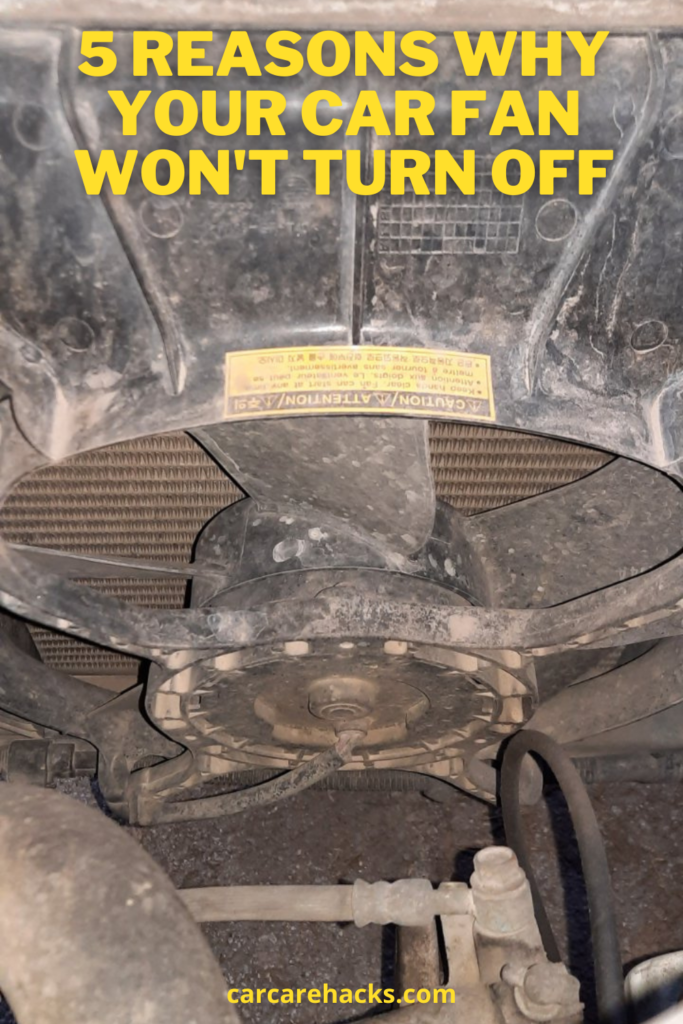