The EGR cooler is an important part of your engine. It helps to cool the exhaust gases that are recirculated back into the engine. If this part fails, it can cause serious damage to your vehicle. In this blog post, we will discuss the top 5 causes of EGR cooler failure and how you can prevent them!

The most common causes of EGR cooler failure are build-up soot and debris, a leak in the EGR cooler, thermal stress such as engine overheating, corrosion from exposure to coolant and exhaust gasses, and overall lack of maintenance.

The EGR cooler is a vital component of the car’s exhaust gas recirculation (EGR) system. Its purpose is to cool the exhaust gases before they are fed back into the engine cylinders. This helps to reduce emissions and improve fuel economy.

However, the EGR cooler can fail due to a number of reasons. Here are the top five causes of EGR cooler failure and how you can prevent them:

1. Build-up of soot and debris

Over time, this soot will build up and eventually start to clog things up. Once enough soot has built up, it can start to restrict airflow through the EGR cooler. This can cause a number of problems, including increased engine temperatures and reduced performance.

In order to prevent this from happening, it’s important to make sure that your engine is running properly and that all of the fuel is being burned off completely. If you notice any signs of soot buildup on your EGR cooler, it’s important to have it cleaned as soon as possible.

Cleaning the EGR cooler is a relatively simple process, but it’s one that should be done by a professional. They will be able to properly clean all of the soot out of the system and make sure that everything is running smoothly again. In most cases, this will resolve any issues that you’re having with your engine and help to improve its overall performance.

2. Leak in the EGR cooler

EGR coolers can leak for a number of reasons. The most common reason is a crack in the cooler itself. These cracks can be caused by a number of things, including:

Regardless of the cause, an EGR cooler leak should be fixed as soon as possible. If left unaddressed, it could lead to major engine damage.

EGR coolers can fail due to thermal stress for a variety of reasons. The most common cause is overheating of the engine, which can cause the coolant to break down and allow the EGR cooler to overheat. Other causes include leaks in the cooling system, restricted airflow to the cooler, and improper installation.

Most EGR systems can withstand temperatures between 1200 and 1800 degrees Fahrenheit. Some systems may be able to withstand higher temperatures, but this is typically not necessary. Many EGR systems are designed to work with exhaust gases that have already been cooled by the engine, so they do not need to withstand extremely high temperatures.

If an EGR cooler fails due to thermal stress, it is important to have it replaced as soon as possible. If not replaced, the engine can suffer serious damage. In some cases, the entire engine may need to be replaced. Therefore, it is important to consult with a qualified mechanic or automotive specialist if you think your EGR cooler may be failing. Do not attempt to repair or replace the EGR cooler yourself. Doing so could void your vehicle’s warranty and cause further damage to the engine.

EGR is typically made out of stainless steel or cast iron. The material is chosen for its durability and resistance to corrosion. EGR systems can be very simple, consisting of a valve and tubing, or they can be quite complex with multiple sensors and valves. No matter the design, the goal of an EGR system is to reduce emissions by recirculating exhaust gases back into the engine.

Corrosion can occur when the EGR cooler becomes exposed to coolant or exhaust gases. This can happen if there is a crack in the cooler, or if the seals and gaskets fail. Corrosion can also occur if the cooling system is not properly maintained. If the EGR cooler is not cleaned and flushed on a regular basis, corrosion can build up and cause problems.

While EGR systems are effective at reducing emissions, they can cause problems for engines if they aren’t working properly. One issue is that the recirculated exhaust gases can contain particles that can deposit on cylinder walls and piston rings. This can lead to increased wear on these engine components and reduced fuel efficiency. Additionally, if the EGR system isn’t working correctly, it can cause the engine to run too lean, which can lead to increased emissions and decreased performance.

If you suspect that your EGR cooler is failing due to corrosion, it’s important to have it checked out by a qualified mechanic as soon as possible. Corrosion can cause serious damage to your engine, and it can be expensive to repair.

Continuing to drive your car with an EGR system that isn’t functioning properly can cause even more damage to your engine. The unburned fuel will continue to build up in the combustion chamber and eventually cause misfires. Misfires can lead to engine damage, as well as decreased fuel economy and performance.

It is important to have your EGR system checked regularly to avoid these issues. A qualified mechanic can quickly diagnose any problems with your system and make the necessary repairs. Don’t wait until it’s too late, schedule an appointment today!

EGR systems are an important part of keeping your car running properly. By having regular maintenance check-ups, you can avoid potential engine damage.

What Happens When The EGR Cooler Fails?

The EGR cooler is a vital part of the emissions control system in your vehicle. When it fails, a number of things can happen.

EGR stands for exhaust gas recirculation. It’s a system that helps reduce emissions by recirculating a portion of the exhaust gases back into the engine cylinders. When it fails, fuel efficiency decreases because the engine is not able to burn all of the fuel correctly. The unburned fuel exits the engine through the exhaust system, which wastes energy and reduces fuel economy.

If your vehicle has an EGR system, it’s important to have it checked regularly to make sure it’s functioning properly. If you notice any decrease in fuel economy, have your mechanic take a look at the EGR system to see if it needs repair or replacement. Ignoring this problem can lead to increased emissions and decreased performance from your vehicle.

When this happens, the coolant can’t flow through the EGR cooler properly and it will eventually overheat and fail. Other common causes of failure include a cracked or damaged coolant line, or an electrical issue with the cooling fan. If you’re having trouble with your EGR cooler, it’s important to take it to a qualified mechanic for diagnosis and repair.

One of the most common symptoms of a failed EGR system is a loss of power. This can be caused by a number of things, but the most common is a blockage in the EGR valve itself. When this happens, it prevents exhaust gases from flowing back into the engine, which reduces its efficiency.

In some cases, it can also cause the engine to run lean, which can lead to further problems. If you suspect that your EGR system is failing, it’s important to have it checked out by a professional as soon as possible. Ignoring the problem could lead to more serious issues down the road.

How Do I Know If My EGR Cooler Is Leaking?

If you’re unsure whether or not your EGR cooler is leaking, there are a few things you can do to check. First, check the level of coolant in your radiator and overflow tank. If it’s low, that could be an indication of a leak. Make sure the engine is cool before removing the radiator cap. If the engine is hot, the coolant can be very hot and can cause serious burns. Next, locate the radiator cap and unscrew it. Be careful not to touch anything inside the radiator while the cap is off. Once the cap is off, take a look at the coolant level. It should be about halfway up the radiator. If it’s lower than that, add more coolant until it reaches that level. Finally, screw the radiator cap back on and check the engine temperature.

Next, check for any signs of coolant or oil around your engine. There are a few ways to check for coolant leaks around the engine. One is to look for evidence of leaks on the ground beneath the car. If you see a green or orange liquid on the ground, it’s likely that your car is leaking coolant. Another way to check for coolant leaks is to look for white smoke coming from under the hood of your car. This could be an indication that there’s a coolant leak in your engine.

Finally, have your mechanic perform a pressure test on your EGR cooler. If it’s leaking, they’ll be able to tell. 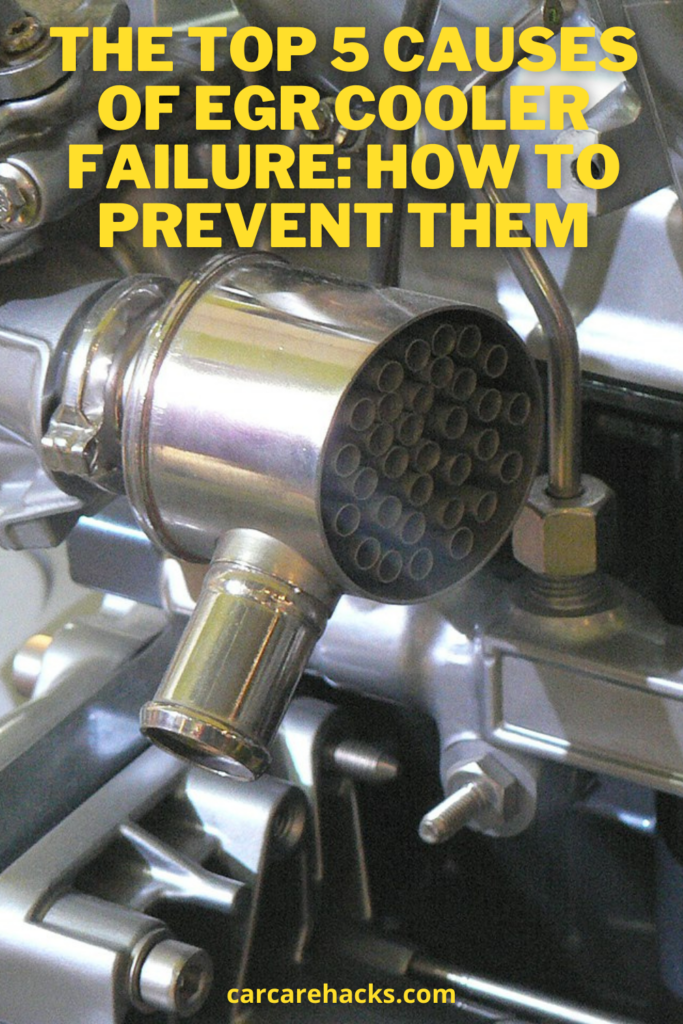