A head gasket is a critical engine component that seals the cylinders and prevents coolant and oil from mixing. When it fails, your car will not run properly and may even be dangerous to drive. There are a lot of tale signs that an experienced mechanic will notice if he has a blown head gasket. But, how can an average joe know what is going on with his vehicle and the head gasket?

In this blog post, I am going to talk about the 8 most common signs of a blown head gasket and what you can do about it.

The most common signs that you have a blown head gasket include losing coolant but no visible leaking, engine constantly overheating, milky oil on the oil dipstick, milky goo on the oil filler cap, white smoke from the exhaust pipe, low engine compression, rough idle and engine misfire, and leaking coolant on the engine block.

What Causes a Blown Head Gasket?

Engine overheating can cause a blown head gasket. If the engine gets too hot, the cylinder head can swell to the point that it crushes the head gasket, so it no longer seals like it’s supposed to.

2. Issues associated with the combustion process

In short, when the combustion process is occurring outside normal circumstances, it can put a lot of stress on the head gasket. Over time, the head gasket will wear and cracks will start to appear. Through these cracks, coolant and oil can mix and this can lead to major engine repairs.

3. Using the wrong type of coolant

Using the wrong type of coolant is another possible cause of head gasket failure. If the vehicle owner has been fighting a leak by topping off the coolant with water or the wrong coolant, it can degrade the head gasket allowing other liquids to come in contact with the coolant.

Regardless of why a head gasket fails, you should get the head gasket replaced as soon as you notice it. A blown head gasket will lead to major issues and big repair bills.

The head gasket is a seal that sits between the engine block and the cylinder head. It seals in the combustion chamber and prevents coolant and oil from leaking into each other. When the head gasket blows, it can cause the engine to lose coolant.

Let’s say that your vehicle keeps losing coolant and you have to top it off every week or so. Normally, you would look for a leak below the vehicle but you will not find one. However, the coolant keeps disappearing and you have to add more and more. Losing coolant without any visible leaking is a very common sign of a blown head gasket.

The leaking can be very hard to notice because it may leak a few drops of coolant in the cylinders and might not produce white smoke.

If the engine overheats, it can cause major damage. The most common problem is that the engine will seize up, which can lead to expensive repairs. Additionally, overheating can cause warping and cracks in the engine block or cylinder head. This can lead to leaks and a loss of compression, which can also be costly to repair.

It’s important to take care of your engine and make sure it doesn’t overheat. If you notice your engine temperature gauge moving into the red zone, pull over and turn off the engine as soon as possible. Let it cool down for a few minutes before checking the radiator fluid level and adding more if necessary.

3. Milky oil on the oil dipstick

When the head gasket fails between the coolant and the oil passage it allows the oil and the coolant to mix which results in milky oil on the oil dipstick. You can check this by locating the oil dipstick and pulling it out. If there is a milky oil and not regular oil on the dipstick, it is a clear indicator that the head gasket has blown and it is allowing for oil and coolant to mix, which shouldn’t happen ever.

Milky oil on the dipstick can also be due to the engine burning oil. But, a blown head gasket allowing oil and coolant to mix is more common.

Engine oil and coolant are both vital fluids that play important roles in keeping your car running properly. When they mix, it can throw off the delicate balance between them and cause all sorts of problems.

Some of the most common issues that arise from oil and coolant mixing include decreased cooling efficiency, increased engine wear, and oil leaks. In extreme cases, it can even lead to engine failure. So if you ever find yourself with a mixture of oil and coolant, be sure to get it taken care of as soon as possible.

When the head gasket fails and allows the engine oil and coolant to mix, you may also find milky goo on the radiator cap. With the engine cold, remove the oil filler cap and inspect the bottom of the cap. If there is milky goo on the bottom of the oil filler cap, this is a clear sign that the head gasket is blown. Please note that this condition can also be caused by a cracked cylinder head or a leaking manifold. However, a blown head gasket is more prone to this kind of failure.

When you see this milky goo in your coolant, it’s an indication that there’s oil in the system. This can happen for a few reasons, but the most common is a head gasket leak.

If you think you might have a head gasket issue, it’s important to get it fixed as soon as possible. If left unaddressed, a head gasket leak can cause serious damage to your engine. So if you see milky goo in your coolant, don’t wait – take your car to a mechanic and have them check it out.

5. White smoke from the tailpipe

White smoke from the tailpipe when you first start your car is not normal and neither is white smoke constantly coming out of the tailpipe while idling or driving. This happens when the head gasket fails between the cooler passage and the combustion chamber and allows coolant to get into the combustion chamber and get burned with the fuel/air mixture.

One of the most common reasons for white smoke from the tailpipe is a blown head gasket. The head gasket seals the engine block and cylinder head, and if it blows, it can cause coolant to leak into the combustion chamber. This will result in white smoke coming out of the tailpipe, as well as other symptoms like overheating, misfiring, and low coolant levels.

This is important and you shouldn’t confuse a little bit of white smoke when you first start your vehicle because that is condensate. I am talking about a big white cloud of white smoke that comes up from the tailpipe when you start your car. That is obviously a clear sign that your engine is burning coolant. If you see a bluish smoke, it means that the engine is burning oil as well. You shouldn’t keep your engine running if you see white smoke because it’s probably dumping water in one or more cylinders.

When the coolant enters the cylinders, the piston will push the coolant through the exhaust valves and straight into the hot catalytic converter. When coolant gets in contact with the hot exhaust, it is going to turn into white smoke.

If you have a blown head gasket, it’s important to get it fixed as soon as possible. Otherwise, your engine will continue to lose power and may eventually fail completely. If you’re experiencing any of these symptoms, take your car to a mechanic and have them check for a blown head gasket.

7. Rough idle and or engine misfire

A misfire is when an engine cylinder fires improperly. This can be caused by a number of factors, including a dirty spark plug, a bad fuel injector, or a problem with the ignition system. A misfire can cause a rough idle, as well as loss of power and decreased fuel economy.

Head gaskets are designed to control engine coolant in and around the engine block and cylinder heads. When a head gasket fails, it can cause a leak which can be found by removing all the spark plugs, pressurizing the coolant system, and cranking the engine over.

8. Coolant leaking on the engine block

If you’re losing coolant and it’s hitting the engine, there’s a good chance you have a blown head gasket. This is a serious problem that needs to be fixed as soon as possible. If you don’t, your engine will overheat and could be damaged beyond repair.

There are a few ways to tell if you have a blown head gasket. The first is by checking your coolant level. If it’s low and there are no leaks elsewhere, then it’s likely the head gasket is to blame. Another way to tell is by looking for white smoke coming from the exhaust pipe. This happens when the coolant gets into the cylinders and burns off.

Coolant leaking on the engine block is very easy to diagnose. Just open the hood and look on the side of the engine and see if there is orange coolant. Usually, it will be towards the exhaust side.

Can You Drive a Car With a Blown Head Gasket?

If you’re driving and your car starts to overheat, pull over and turn off the engine. Let the car cool down before checking the radiator and engine for signs of leaks. If you see any leaking fluids or smoke coming from the engine, do not start the car again. Call a tow truck and have your car towed to a mechanic.

Is It Worth Fixing a Blown Head Gasket?

A blown head gasket can be caused by many things. Overheating is the most common cause, but it can also be caused by a faulty cooling system, an overworked engine, or even physical damage.

There are a few signs that may indicate a blown head gasket. The most common is overheating, but you may also notice oil leaks, coolant leaks, or white smoke coming from your exhaust. If you suspect a blown head gasket, it’s important to get your car to a mechanic as soon as possible. A blown head gasket can cause serious engine damage if left untreated.

The cost to replace a blown head gasket can vary depending on the make and model of your vehicle. However, it is typically a very expensive repair that goes into the thousands. Whether fixing a blown head gasket is worth it or not depends on a few factors.

Exhaust valves are important components of a car's engine. They regulate the release of exhaust gases from the engine cylinders as they burn fuel. This release has to be done in a pre-calculated... 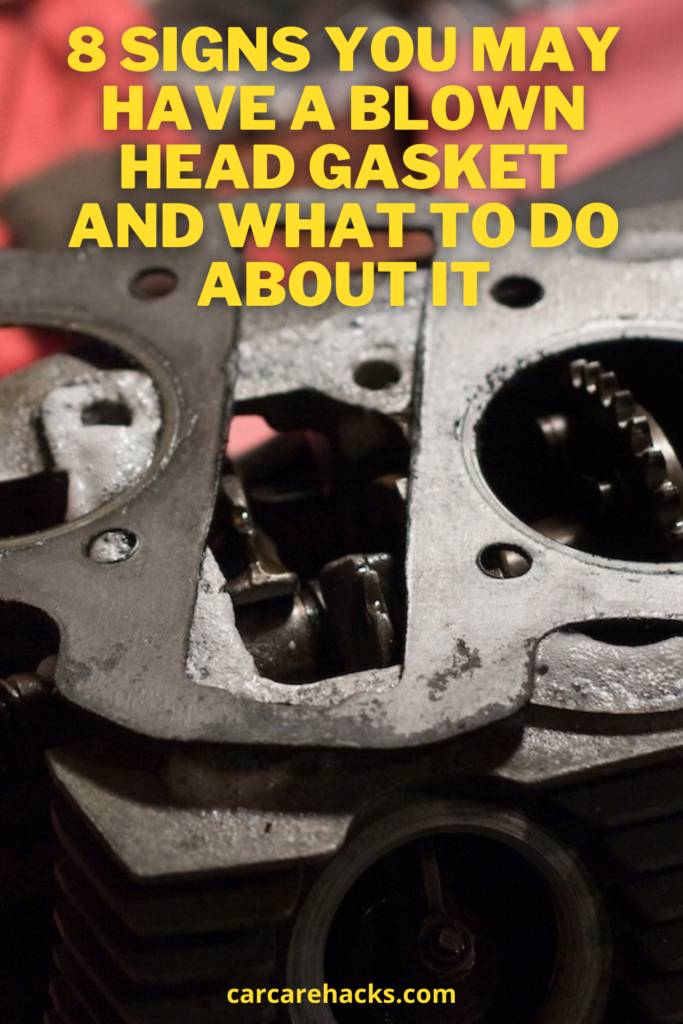