In this blog post, I will be talking about why a car won’t start after overheating. After reading this article, you will have a basic understanding of what happens when an engine overheats, and how to get your car up and running again.

A car may not start after overheating if the head gasket is blown, the cylinder heads are melted or warped from the high temperature, the electronic sensors melted from the heat, warped or melted belts, burst hoses, and warped cylinder block which leads to loss of compression.

Why A Car Won’t Start After Overheating

A head gasket is a crucial component of any car engine, and it plays an important role in keeping the engine running smoothly. The head gasket seals the space between the engine block and the cylinder head, and it prevents oil and coolant from leaking out.

The head gasket seals the engine block and cylinder head, keeping coolant and oil from leaking out. When the engine overheats, the head gasket can warp or break, causing a loss of pressure. As a result, the engine may not be able to start.

If your engine temperature starts to rise higher than normal, or if it starts to overheat more quickly than usual, it could be a sign that your head gasket is blown. You may also notice white smoke coming from your exhaust pipe, or coolant leaking from under your hood. The head gasket is what keeps the oil and coolant flowing separately in the engine. When the head gasket is blown, those two would mix and will either leak out of the engine or get burned in the combustion chamber and get out of the exhaust pipe.

The cylinder head of an engine is responsible for a number of vital functions. chief among these is the sealing of the cylinders, which prevents the escape of compression and the entry of oil or coolant. The cylinder head also houses the valves, which regulate the flow of air and fuel into the cylinders, as well as the spark plugs, which ignite the fuel-air mixture.

Warped cylinder heads are one possible reason why a car might not start after overheating. If the engine gets too hot, the metal can expand and distort the shape of the cylinder heads. This can cause problems with the way the pistons move up and down, preventing the engine from starting. In some cases, warped cylinder heads can be repaired by a mechanic. However, in severe cases, they may need to be replaced.

The electronic ignition system in your car uses sensors to control the ignition timing. These sensors are located at the front and rear of the engine, and they send signals to the electronic control unit (ECU). The ECU then adjusts the timing of the spark plugs so that they fire at the correct time. This ensures that the engine runs smoothly and efficiently.

These sensors are located in the air intake and the exhaust system, and they constantly monitor the amount of air and fuel being used by the engine. If the sensor detects that the mixture is too rich or too lean, it will adjust the amount of fuel being injected into the engine.

If your car overheats and then won’t start, there’s a good chance that one of the electronic sensors has melted. The sensors are located in the engine and control a variety of functions, including the ignition timing and fuel injection. When they get too hot, they can melt and cause all sorts of problems.

There are several types of belts in a car, each with a different purpose. The fan belt helps to cool the engine by driving the water pump and fan. The alternator belt powers the alternator, which in turn charges the battery. The power steering belt provides power assistance to the steering system. And finally, the serpentine belt drives all of the pulleys on the engine, including the water pump, fan, alternator, and power steering pump. Each of these belts is critical to the proper functioning of a car.

The belts in a car are made of a variety of materials, depending on the type of belt and its intended use. V-belts, for example, are often made of synthetic rubber, while timing belts are typically made of reinforced fiberglass or Kevlar. Serpentine belts, which are used to drive accessories such as the alternator and power steering pump, are usually made of EPDM rubber.

Overheating can cause major damage to your car. If the temperature gauge needle moves into the red, it’s time to pull over. Continued driving could cause the engine to seize. Melted belts are one reason a car won’t start after overheating. The serpentine belt, timing belt, or fan belt can slip off its pulley if it gets too hot. The coolant pump may also stop working if the belts melted. Inspect the front of the engine for any signs of melted plastic.

Overheating is a common problem with cars, and it can have a variety of causes. In some cases, the radiator may be low on fluid or there may be a problem with the water pump. However, one of the most common reasons for an overheated engine is a burst hose.

A hose carries coolant through the radiator and back to the engine, and if it springs a leak, the coolant can quickly drain out. As a result, the engine will overheat and may eventually seize up. If you find yourself stranded with an overheated engine, check the hoses for signs of leaks or damage.

You will first need to fix the hose and add coolant to the radiator. Then, you can try and start your vehicle. However, if you try to start your vehicle without fixing the issue, there is a great chance that the car won’t start after overheating.

The engine block of a car is the central component of the vehicle’s engine. It is typically made from cast iron or aluminum and houses the various parts of the engine, such as the cylinders, pistons, and crankshaft. The engine block is also responsible for distributing heat evenly throughout the engine and keeping it cool. In addition, it helps to reduce noise by absorbing vibrations. Engine blocks are typically very durable and can last the lifetime of a car with proper care and maintenance.

One possible reason your car won’t start after overheating is a warped engine block. When a car overheats, the engine block can be damaged in a number of ways. Firstly, excessive heat can cause the engine oil to break down, resulting in increased friction and wear on the engine components. 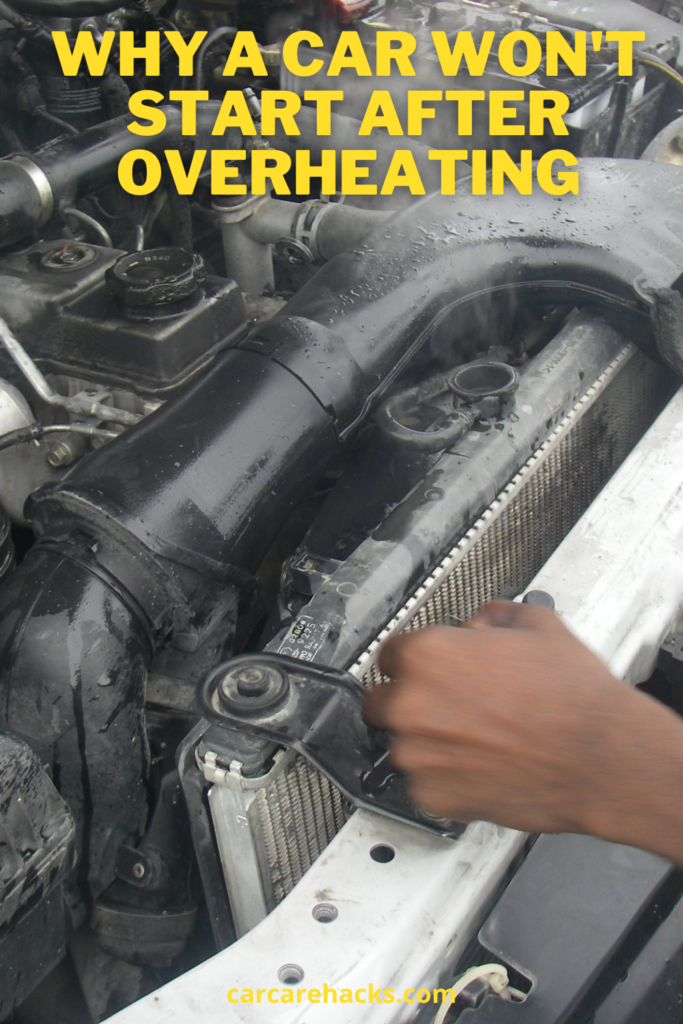