Despite the size of the fuses in vehicles, they do play an important role. Like all parts in the vehicle, fuses to have an expiration date. They get blown when being exposed to a high current in order to prevent that current from traveling to the main component and damaging it.

Basically, fuses are in the first line of defense and they take the hit so the main component doesn’t get burnt. Each vehicle has a few 40 amp fuses that protect many important components. But, what does a blown 40 amp fuse look like? How can you tell when you need to change your 40 amp fuse?

What Is The 40 Amp Fuse Used For In Cars

The 40 amp fuse is used in vehicles to protect components from overcurrent and short-circuiting that require 40 amps to operate. This includes the ABS system, ignition, ECU, window regulator mechanisms, and AC fans. When some of the components draw a stronger current than it is designed to handle, the 40 amp fuse gets blown in order to stop the current from traveling to the main component and burning it.

Basically, the larger the amperage, the more important and expensive the component is. So, instead of expensive components getting burned by drawing higher current each time they malfunction, vehicle manufacturers came up with a $2 40 amp fuse that will get blown instead of the main component.

Today’s vehicles can contain up to 100 ECUs, maybe more. Each of the electronic control units has been designed for a specific job including ABS, power steering control, the way to power windows, seat heaters, and AC. There isn’t room in the fuse box for each ECU, so many of them are protected by the same 40 amp fuse.

How To Replace a Blown 40 Amp Fuse

Before you start the replacement task, you will need to get a new 40 amp fuse. The 40 amp fuses are so cheap that I just order a bulk of 10 online. Here is a 10-pack of 40 amp fuses on amazon.com. Just make sure that you get the exact same as your blown fuse. There are blade-style and cartridge-style 40 amp fuses. Also, do not try to install a fuse with different amperage as it will get blown immediately.

2. Open the hood and locate the fuse box

Some vehicles can have fuse boxes in multiple locations. The most common locations for fuse boxes are underneath the steering wheel and under the hood. However, the 40 amp fuses are usually located under the hood. You can always check the owner’s manual to learn more about your vehicle’s fuses.

Pull the latch and open the hood. The fuse box is usually located on the right side of the engine, next to the battery. On many vehicles, the fuse box will be labeled.

3. Open the fuse box and locate the faulty 40 amp fuse

To open the fuse box, you will need to pull the clip or tab and slowly remove the lid. There is a diagram on the fuse box lid that will help you easily locate the 40 amp fuse. As you can see, there can be multiple 40 amp fuses, so if you are not sure which one is blown, you can replace them all.

There are a couple of ways to remove a blown 40 amp fuse. The method will depend on how bad the fuse is blown. In some cases, you might find a completely melted fuse. In that scenario, I would disconnect the battery before moving forward.

If only the fuse wire is blown, you can remove that fuse with your hands. If it’s stuck, you can go ahead and use pliers. However, be careful not to break the fuse in two and end up with half fuse stuck into the port. As far as a completely melted fuse, I would use gloves and pliers. Make sure to remove all of the pieces before installing a new fuse.

A blown 40 amp fuse can be a little bit tricky to visually inspect because it sits in a cartridge. So, to gain access and a better look, open the lid of the cartridge. To do this, you will need a toothpick. Push the tabs on each side of the cartridge and slowly pull the lid.

At this point, you can actually see if the 40 amp fuse is indeed blown. The metal alloy strip that runs from one copper contact to another has to be intact. If that ”bridge” looks like it’s disconnected, the fuse is blown. However, it’s not always this easy to visually inspect a blown fuse. Sometimes, the metal alloy strip tends to break in a hard-to-see place. So, that is why you should also check it with a multimeter.

6. Test the blown 40 amp fuse with a multimeter

Turn on your multimeter and set it on Ohms. Before you go ahead and test the blown 40 amp fuse, make sure to calibrate the multimeter first. Touch the red and black wires of the multimeter. If you get the same reading (1 in my case) when you touch the two wires and after that when you test the fuse, it will mean that the fuse is working properly.

However, if you get a reading of 1 ohm when you touch the wires, but then get a completely different reading when you test the 40 amp fuse, it means that the fuse is blown. I always like to test the fuses with a multimeter because sometimes they are not blown as I think, or they are blown but in a hard-to-see spot.

To actually test the 40 amp fuse with a multimeter, you need to insert the wires on the backside of the fuse, into the copper contacts, one wire per copper contact.

7. Install the new 40 amp fuse and close the fuse box

Install the brand new 40 amp fuse into the same slot that you pulled out the blown one. Make sure that there is no dirt and debris in the fuse port. Then, go ahead and close the fuse box and press it down until you hear the tabs click.

A 40 amp blade-style fuse costs $1 and a cartridge-style 40 amp fuse costs around $1.5 per fuse. These prices are from Amazon. However, you can also check your local auto part stores or even a gas station. Buying fuses in bulk is even cheaper. 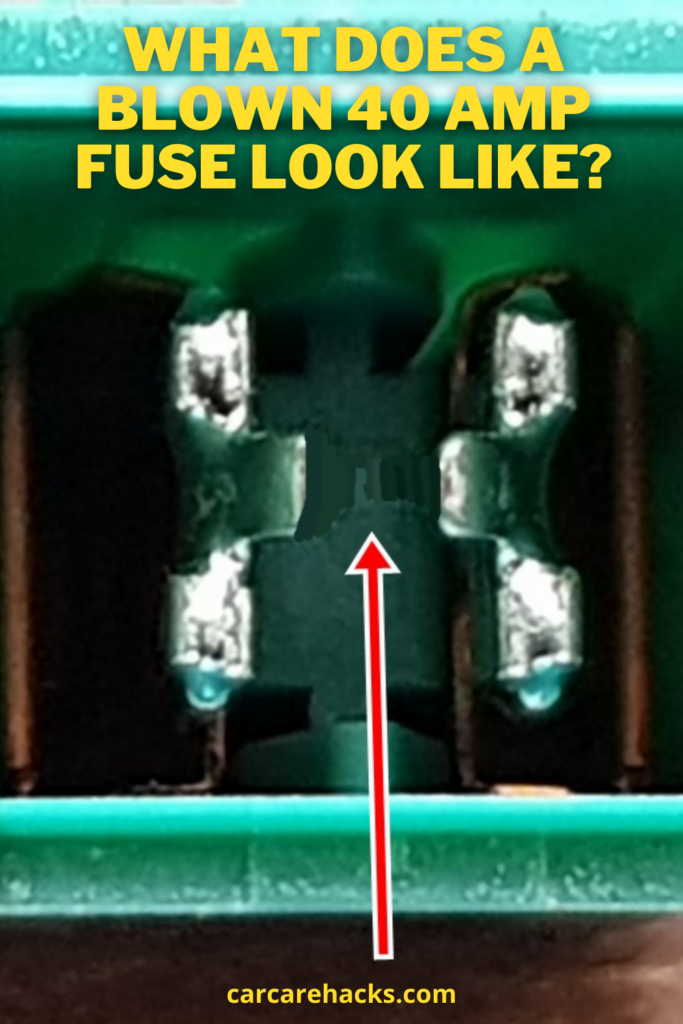