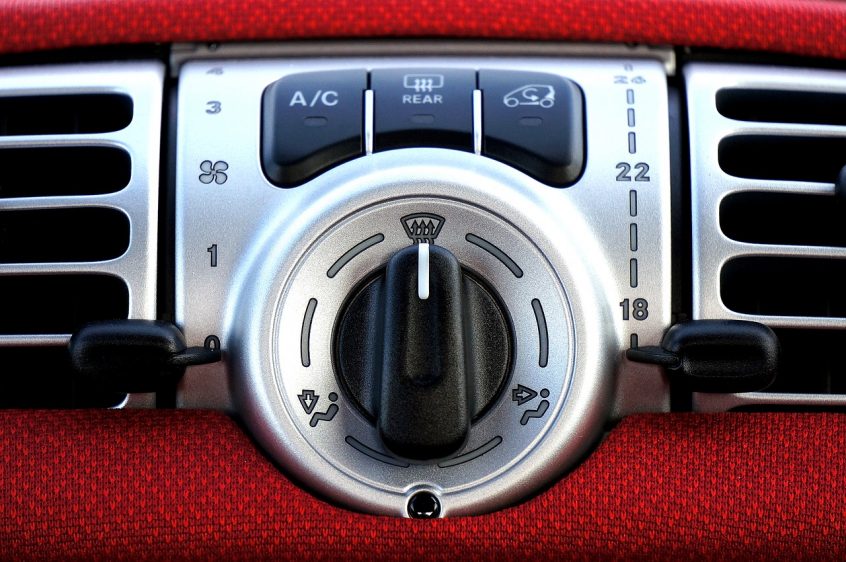 ”You don’t have to take your car to the mechanic in order to remove ac smells in your car. You can do it by yourself by spraying Lyson into the AC air-intake. It’s an easy way that doesn’t requires special skills. See how its done below.”

Here’s an old a/c evaporator that I just changed in a car.

As you can see, there’s all kinds of mold and bacteria growing inside. So, when you turn your air conditioner on full-blast, that air is blowing mold and bacteria right into your face. But don’t give up and drive down the road wearing a gas mask. Instead, kill that mold and bacteria with a little disinfectant spray.

How to Remove AC Smells in Your Car

Now, a professional mechanic would have all kinds of machines and tools to flush out an a/c system, but I found that often a can of Lysol (get one on amazon.com) every  couple of months will do just as good of a job. Here is what you need to do:

Step 1: Turn on the air conditioning.

All cars have different designs, but we all know how to turn the AC on.

Step 2: Turn off the re-circulation

The reason why you are turning of the re-circulation is because you want fresh air to come in.

Step 3: Then turn the fan speed to full blast

Step 4: Roll down all the windows, front and back

Disinfectants are pretty strong, so you want to roll the windows down so the chemicals from the spray will automatically go into the atmosphere.

Go to the front of the vehicle by the windshield, and if you feel with your hands, you can feel air being sucked in. That’s the intake.

Spray about half a can of Lysol into the intake, and make sure you do both the drivers and the passengers air intake side, so spray the passenger side too. You want the cleaner to saturate all of the inside of the air-conditioning duct work. It’ll kill all the mold and bacteria, so the smell will go away.

Now, as you can see, this stuff is pretty strong. It says hazardous to humans and domestic animals right there on the can, and that’s why you want to leave all the windows open, so it’ll air out. If you’re really sensitive to odors, you might leave the windows open overnight in your garage, so the whole vehicle airs out completely. If you’re living in a hot and humid place like Houston Texas, you might have to spray the stuff in, four or five times during the summer, to keep the bacteria from coming back. They multiply rapidly, so the next time your air-conditioning starts to get stinky, throw away your gas mask, and clean out that bacteria with a little Lysol, and your nose will thank you.

There is a new bad change that’s occurring in modern car air conditioning system. By law in the United States, the are changing the refrigerant from R134A to R1234YF a new type of refrigerant. Years ago the change was made from R12 which was called ”freon”, to R134A and that was a big enough pain. Now, it’s all based on laws to not deplete the ozone layer. The R134A is less ozone depleting than the R12, and this new one is much less ozone depleting. But if you ask me, the tiny amount of refrigerant that’s in cars that sometimes leaks out it’s not that big of a deal really, when you consider how much gasoline we burn and pollute the atmosphere with that stuff. This whole changing refrigerant scene that they’ve been doing lately, hey it’s kind of like closing the barn door after the horses have already ran away.

Having these new AC systems worked on it’s going to cost you a whole lot more money, but perhaps the worst aspect of this new R1234YF refrigerant is this: The old R134A is virtually inflammable, it’s not going to start on fire. If you get in a wreck and it leaks out or if it has a leak in the dash and gets inside and you’re smoking a cigarette, it’s pretty much nonflammable under any condition you’re going to meet in a car. But, this new R1234YF refrigerant is actually flammable. Now, you would think the scientists with all their intelligence could come up with a better system than replacing a nonflammable gas with a flammable gas in cars that people drive. Let’s say you get in a wreck and the ac system starts gassing out. That could start on fire, or if it starts leaking inside the evaporator, that could start a fire inside your car. This flammability is such a big deal to some manufacturers. German manufacturers Daimler, Volkswagen and others don’t want to use R1234YF in their vehicles but will do so for the near future to meet U.S. refrigerant regulatory actions. They tested the system in their cars and said when the compressor ruptured it could start fires inside the engine. Then they found something even worse, that burning R1234YF emits toxic hydrogen fluoride gas. You really don’t want to be breathing that stuff in if something happens.

Germans Are Working On Something New

The Germans are working on something called R744 which is CO2, carbon dioxide. Now, of course we breath out carbon dioxide so it’s not flammable. It’s a very cheap gas, but in itself it has a big problem. R134A and the new R1234YF, they have the highest operating pressure at a high point of 300-400 PSI, but the carbon dioxide system can operate at 1,400 PSI. So, there’s a lot more pressure. And guess what? The higher the pressure, you have to build them stronger, they have to be made better, they cost a lot more to make, and with that extra pressure, of course they’re going to break faster, and of course that much pressure in itself can be dangerous. If you’ve got 1,400 PSI pressure in your dash and it blows up, it could send shrapnel all over the place. So, of course now they’re working on even more complex systems where the CO2 system is all under the hood of the car, and then there’s another cooling system that takes the cool air from that system under the hood and moves it inside the dash. I mean these things are getting more and more insanely complex for a system that worked fine in the first place.